Friends,
Emailing somebody is one of the worst things you can do to a person, so I have to question the sanity of anybody who specifically requests more emails. That being said, thank you for allowing me to intrude on your inboxes. I promise these newsletters will be mercifully infrequent and will contain zero guff. I’ll give you broad progress updates on the book, some insight into how I’m writing stories, and I’ll share some of the books, art, and music inspiring me as I go. This particular email should take just over 4 minutes of your time. Thank you, again. Onward →

I. The Book
If you haven’t been keeping score at home, Harper Perennial agreed to graciously lower their standards and publish Dictionary Stories in 2018. It’s very exciting. The contract was signed back in August, and since then I’ve been furiously chipping away at a word count I now visualize as a large blinking neon sign floating above my head. You’ll hear a lot more about it next year, but I’m currently knee deep in stories—aiming for an amount somewhere between a baker’s dozen and... twenty baker’s dozens—and will begin double duty working on illustrations after the holidays.

II. Process: Dictionaries
When I first began writing these stories, I leaned heavily on MacOS’ proprietary Dictionary app, which references the New Oxford American Dictionary. Though NOAD has somewhere in the region of 90,000 example sentences, I knew I wanted to explore other dictionaries to see how they might affect the tone and content of the stories. As of today, I have 6 dictionaries in my arsenal, so for this first look at my process I’ll be introducing you to the team. 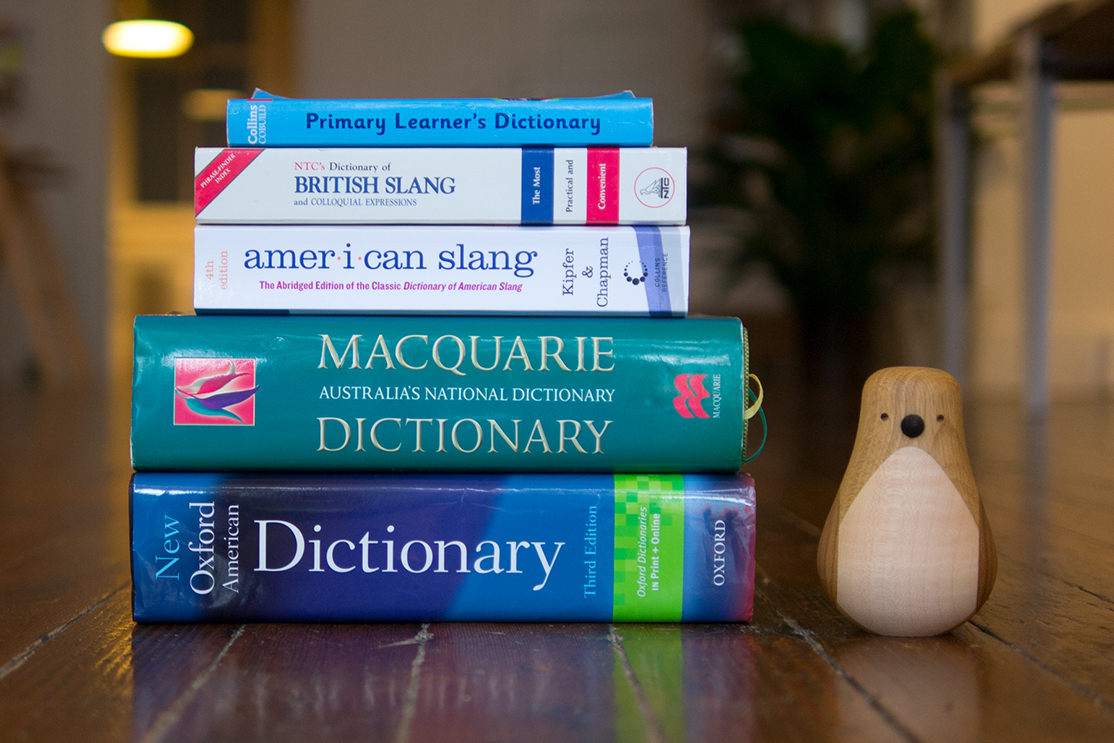 New Oxford American Dictionary
a.k.a. Old faithful. NOAD has the widest variety of examples: full sentences (‘The team has been researching into flora and fauna’), short fragments and clauses (‘a torrential downpour’), plenty of speech (‘“It's OK, we're not related,” she joked’), and much more besides. Thanks to a brilliant friend, I have the entire dictionary as one enormous but searchable .xml file, which currently makes it the easiest dictionary to write with.

Collins COBUILD Primary Learner's Dictionary
A cute little volume intended for UK primary school students aged 7 and above, Collins COBUILD was the second addition to the pile. Sentences are somewhat simpler and shorter compared to other dictionaries, but the content is often no less adult—I’m sure ‘She came into the room, almost completely nude’ will be useful in the classroom.

Macquarie Dictionary
Australia’s dictionary of note. I’m using the third edition of Macquarie which has a tremendous amount of short, clipped fragments (‘lost ships’, ‘for the time being’, ‘a sudden attack’) which are enormously helpful for peppering between longer, more elaborate sentences to play with rhythm. Macquarie also contains hundreds of beautiful examples from Australian literature.

Collins Dictionary of American Slang
I can’t believe I wasted so many years as a young boy looking through regular dictionaries for dirty words, when I could have picked up any slang dictionary and found the motherlode. Besides the filth, this dictionary is also packed with slang from the 1940s–1950s, which is endlessly entertaining. I’m currently trying to find a home for, ‘Damn his lazy, jive-ass soul’.

NTC Dictionary of British Slang
More filth (and an embarrassment of best-ignored racial slurs), from the other side of the Atlantic. Uncomfortable reading abounds, however, I am partial to anything that sounds ripped from a P.G. Wodehouse novel (‘You may call it a tumble in the hay, my dear. I call it adultery!’)

American Heritage Dictionary of Idioms
Last but not least, I found this dictionary in San Francisco’s indispensable Mechanics’ Institute Library, and immediately fell in love. Stories written with entirely idiom-heavy sentences are harder to construct, so I often use these examples together with one or two other dictionaries. A current favourite: ‘Can he make a living as a freelance trumpeter?’

III. Inspiration: Ali Smith
If you also read Jeff VanderMeer’s tremendous Southern Reach Trilogy this year, you’ll be familiar with the idea of terroir: the concept that the natural environment grapes are grown in (soil, climate, topography, etc.) can give wine a sense of place or ‘somewhereness’. I’m curious to see how my own environment—specifically the books, music, and art I’m enjoying—will seep into these stories over the next few months. If the final product contains even 1% of Ali Smith’s particular environmental influence, I’ll be happy.

Ali Smith’s writing is insightful, inventive, acrobatic and playful—she writes about art, time, death, and sexuality, in a way that makes me feel short of breath, and I recommend her 2014 book How to be both to practically anybody I talk to for longer than 3 minutes. The book I think about most when I sit down to write recently, however, is Artful (2012). The book mixes a series of four lectures on comparative literature Smith gave that year, with a fictional story about the narrator recovering from the death of her partner. While it might sound lofty or esoteric, it reads like an excitable, tricksy friend skipping you through their personal library. You feel positively welcomed in, invited to share in every revelation, every connection, every joke. A good thing to aim for.

Underlined words are those responsible for each example sentence.